After the lengthy and rather emotional story of Helen last week, a bit of a change of pace this week. Some of us only pay lip service when we feel strongly about something but Heath actually took action when he heard something he didn’t like from our country’s leaders.

Heath is a photographer who took the image shown in my first Human of Hampton – Mark. He grew up in North Balwyn doing what kids do, then did what many people in their early 20s do, went to the UK and Europe until his Visa expired. Heath’s story begins from when he came back from overseas…

I had dreams of being a famous photographer. I was still learning about photography. I hadn’t studied it and so it was a lot of learning from magazines. Some of the stuff I did was good but it was just very sporadic.

I eventually came back from overseas and started studying photography part time for four years and working full time. And then I ended up at RMIT for a year to convert my diploma to a degree. I then assisted commercial photographers, really good photographers, for about three years. I learnt a lot of technical stuff from those guys because they were old school and we’d learnt on film. Digital was only just starting to come in and it was still expensive and it hadn’t been perfected to what it is now.

After working at The Age, The Sunday Age and for one of local papers out in Airport West I started to window clean part time one weekends for a friend of mine to make a bit of extra money. In the end I got sick of the paper and went to work with him full time and was still photographing commercial stuff part time.

It was during this time I met Libby. I was working for a guy in a catering company part time and he rang me one day and said “I’ve got a friend who likes you”. And I’m like “sure you do, okay”. He had a photo of her and I said “she looks good”. He had a shoe obsession, so I held his sneakers to ransom until he gave me her number. We found out she knew my brother, my parents knew her mother. I knew her mother from when I worked in a supermarket back in the North Balwyn days; she was one of the chatty customers who I’d speak to every week. So we’d both travelled the world expecting that we’d end up with someone exotic but we ended up both being with someone from North Balwyn.

We were both in our late 30s and we thought “you know what, how long are we going to keep looking? Let’s run with it and see where it goes”. We were pregnant within three months of meeting each other. She was living in a house here in Hampton so I moved in with her. Our eldest did go to Hampton Primary but now goes to Sandy East because we like the teaching method at the school and she seems a lot happier there. Our youngest goes to kinder in Sandringham.

Last October I had quite the adventure going to Kiribati (pronounced Kira-bass) in the South Pacific and then Paris which in September was not even something I was going to do.

This came about because in September last year there was a Pacific Island Leaders conference and at this time Tony Abbott was still in power. Kiribati is a low lying Island, they’re only about two metres above sea level. It’s a nation of 33 Atolls – 31 inhabited – and they’re all pretty much the same height. As sea levels rise when there’s a storm they get flooded more easily and it causes a lot of infrastructure and fresh water problems. Also it’s dangerous, a few big waves and it’d wash everyone off the Island. The then President of Kiribati, Anote Tong, pleaded with the governments of Australia and New Zealand to increase their emission reduction targets. Tony Abbott said no because we’ve got an economy to run and I thought that was the most horrendous, horrible excuse you could even say. I thought it was really colonialist in its attitude, it was saying we are superior, us white folks are better than you brown folk. Not surprising, but it really got my back up. Then there was that thing with Abbott, Dutton and Morrison giggling at water lapping at your door, just shocking. (You can view that footage here.)

The Paris Climate Change Summit was coming up in December. So I sent an email to the government of Kiribati and said “I’ve got this idea, it’s not that Australians don’t care about Kiribati, we just don’t know anything about Kiribati. Most people have no idea who you are, where you are, what you look like, what do you do”. And so my idea was to photograph as many people as we could and have it exhibited in Paris during the Climate Change Summit – so you’ve got this wall of humanity, just lots of lots of portraits. And they said “yeah we really like that idea”. It took about a week or so to get the response but I wanted some kind of letter of support.

They said they had no money but they supported the idea. They’re a very poor nation so they really have bugger all money anyway. For a week I was like “what do I do now?” So I rang a photographer friend of mine, Darren, and said “this is the situation” and he goes “I’m in”. He had the money to cover some costs and we crowd funded the rest of it. In three weeks we raised about $1,100 through Facebook and the website.

The flight to Kiribati took 26 hours from the moment I left my front door to getting there. I walked to the train station because the bus hadn’t come on time, to Spencer Street, from Spencer Street to Avalon, from Avalon to Sydney, Sydney to Brisbane, Brisbane to Nauru, Nauru via the Solomon Islands to Kiribati.

Kiribati get so few tourists; if you say you’re there as a tourist, they look at you suspiciously. So I had to drop the name of my government contact. I said “speak to Ramon, he’s the guy”, so that got me through quickly. But they rang him to check that I was on the level.

We drove up the only road on Tarawa, people live in elevated huts. They had no windows because it’s 30 degrees every day and 27 every night and it’s an Atoll, it’s basically a strip of land. It looks like a mark that’s left from a coffee cup. There’s a lagoon in the middle and then there’s just land that runs around it. The Island we were on was very heavily densely populated. It’s the third most densely populated places on the planet.

I remember feeling just ashamed of seeing these people, then thinking about all the stuff we complain about and all the stuff we have and here they are in basically huts. There’s so little room. People are buried at the front by the street. There’s pigs just tied around, there’s a lot of dogs. I wouldn’t say they live in poverty; they just have a very simple life. So I wouldn’t say they were poor but they don’t have a lot of stuff.

We were there for about eight days and walked up and down the Island. People just crammed into the buses, which were basically a mini bus, that if you were lucky had air conditioning but generally didn’t. They’d yell out their destination. Some spoke English and some spoke Gilbertese which was the local language. We knew a few words but the bus ride from one end of the Island to the other cost about a dollar or something. It was Australian money so it was quite easy. 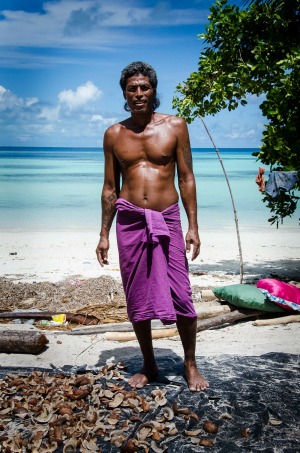 We spent three days on a neighbouring island which people told us was rural. We didn’t know what that meant but when we got there we discovered rural means no electricity. There was no alcohol or cars on the Island. We spent three days riding motorbikes up and down the Island taking photos of people.

It was just a hell of an adventure. The people were really friendly and really, really helpful.  You could always hear a lot of singing and a lot of laughing, even on the main Island. Once we settled in that’s what we could hear above everything else. And it was a really lovely place. You go to the outer islands and it was a bit like paradise. A couple of people stood out as being really generous, just helping us out and it was a really beautiful place.

We came back with 198 portraits. We called the project Your Brother, Your Sister and the idea is that people start thinking of these people as brothers and sisters rather than people on Kiribati. Because it looks like they’ll start moving in the next five years. They’ve got to move or work out what they’re doing because it’s getting to the pointy end of things. And there’s another four Islands who have the same problem.

The government wanted us to exhibit in Paris. We were like “oh we don’t know anyone in Paris and we’ve got three weeks and how are we going to do this”. So while we were overnight in Brisbane I started going through Facebook and found an environmental group in Paris, Save The Climate, and sent them an email. And then an hour later I had a response saying “yeah we’ve got two locations for free”. We had obstacles but everything kept lining up. No matter our problem, a solution arose fairly soon. That kept telling me that I was on the right track.

I managed to even get a discounted air fare to Paris and got $600 off the price. Ended up in Paris for a week. Darren didn’t come. 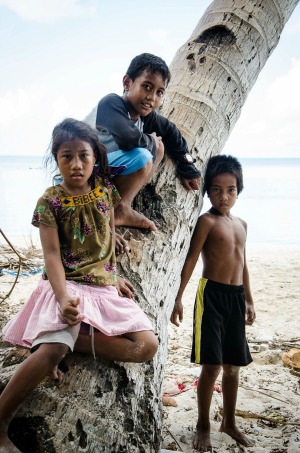 The photographs, which were 10 x 8, were going to be in the Montmartre Town Hall but then the attacks happened in Paris so they had to find a new location for us in a Council building. I don’t know who saw them in the end. I was there for a while with the people coming in and out but because a lot of people were at the Climate Summit a lot of them weren’t available to come and see it. But having said that, now people know more about Kiribati than the 200 people who are friends on our Facebook page. And that it’s a place and that these are the people who live there. It’s a small contribution but we intend to expand it.

I did meet Richard di Natale in Paris. I don’t know if he’s seen the exhibition but he’s seen the website. Met President Tong in Paris as well.

Now I’m just working on new projects. I want to expand this one to the Maldives, Marshall Islands, Tuvalu and Tufalau. It’s just now getting people moving again which is the hardest part but if we start putting deadlines in place then everything happens. Collaboration and deadlines seem to work quite well. But it’s just been the most amazing time.

Would love to hear your thoughts in the comments box below and how about spreading the story love on your FB page by clicking on that little FB box below! 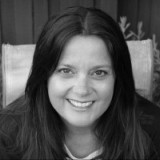